The importance of Code Refactoring in Software

Back to All Posts

Thinking of a piece of software code as something stable and unchanging is not quite the right philosophy. It might be easier to think of a development project as something with a conclusive end. However, the truth of the matter is that even after a program is deployed, it should be thought of as a dynamic evolving organism that will need regular updates and maintenance.

The bottom line is that a piece of software will need continuous attention so long as the program is relevant. How a company chooses to provide this attention may vary, and the process’s resulting ease and expense depends on this chosen route. 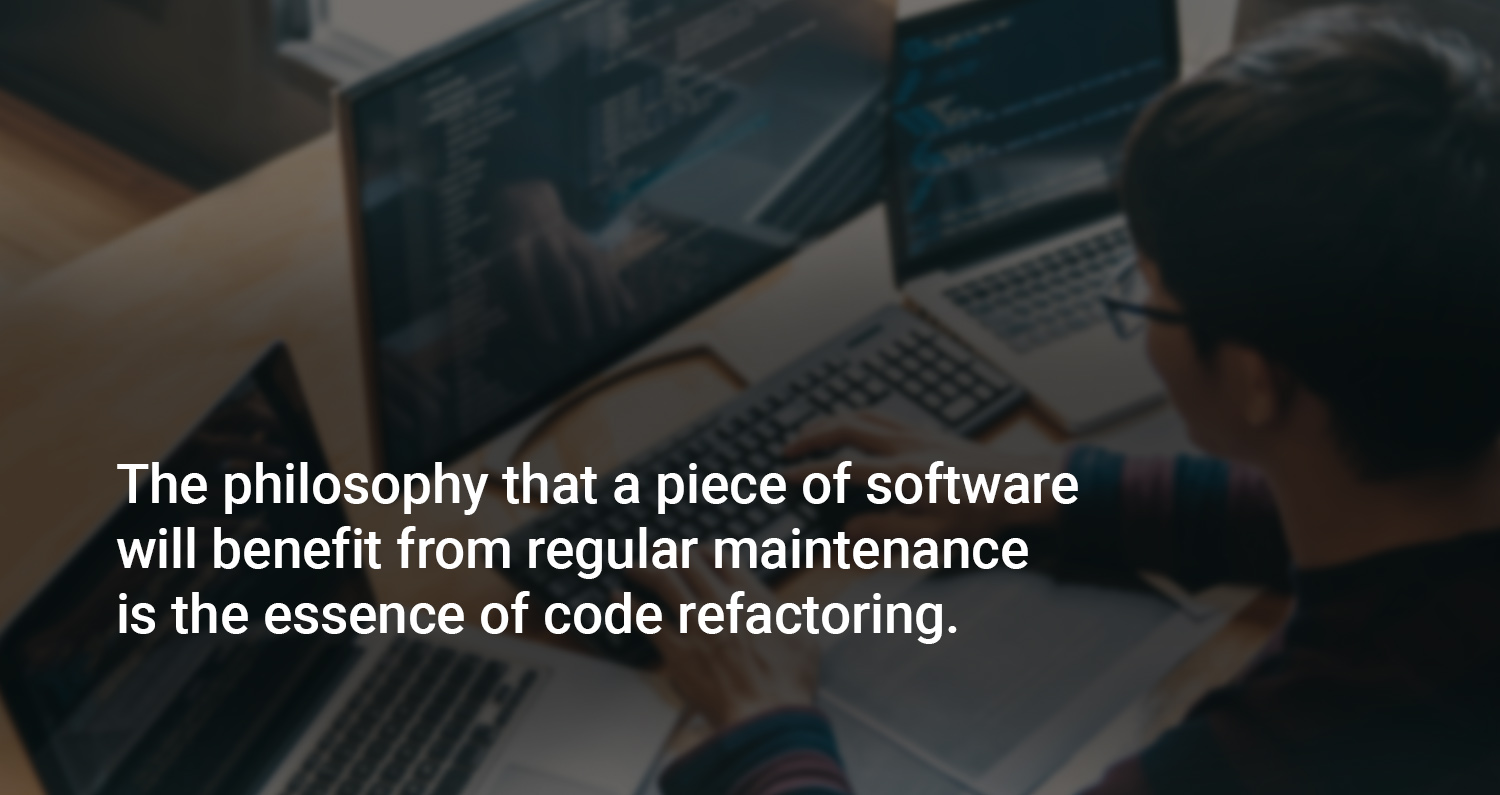 Some go about life with an “if it’s not broken, don’t fix it mentality.” There may be some comfort in this mentality, but it may lead to a few betrayals. If one doesn’t take the time to monitor their surroundings, then when an inevitable “break” occurs, it may come as a surprise, leading to an emergency that requires a lot of attention, time, and funds to fix.

On the other hand, if one invests the time for regular check-ups, adjustments, and reasonable changes, there will be fewer surprises, less rushing, and smaller financial investments. This approach is relevant with almost anything in life, one’s car, personal health, and even one’s code in a software project.

Read on and learn:

What Does Refactoring Mean in Software?

As a program is written, it gets passed from programmer to programmer, all of whom take on the challenge with their own style and preferred libraries. The resulting program starts taking a shape more resembling Frankenstein’s monster than the neat, easily digestible code it was meant to be.

In these cases, it is crucial to perform a bit of clean-up before this disjointed code has a chance to break and cause unexpected, hard-to-fix problems.

According to Martin Fowler, the software developer credited with popularizing code refactoring, refactoring is the process of changing the internal structure of a code without altering any of a program’s outward features. An expert in software development and a proponent of the Agile approach, Fowler’s approach promises many innovations, including fewer bugs, greater efficiency, and less expensive maintenance in the future. 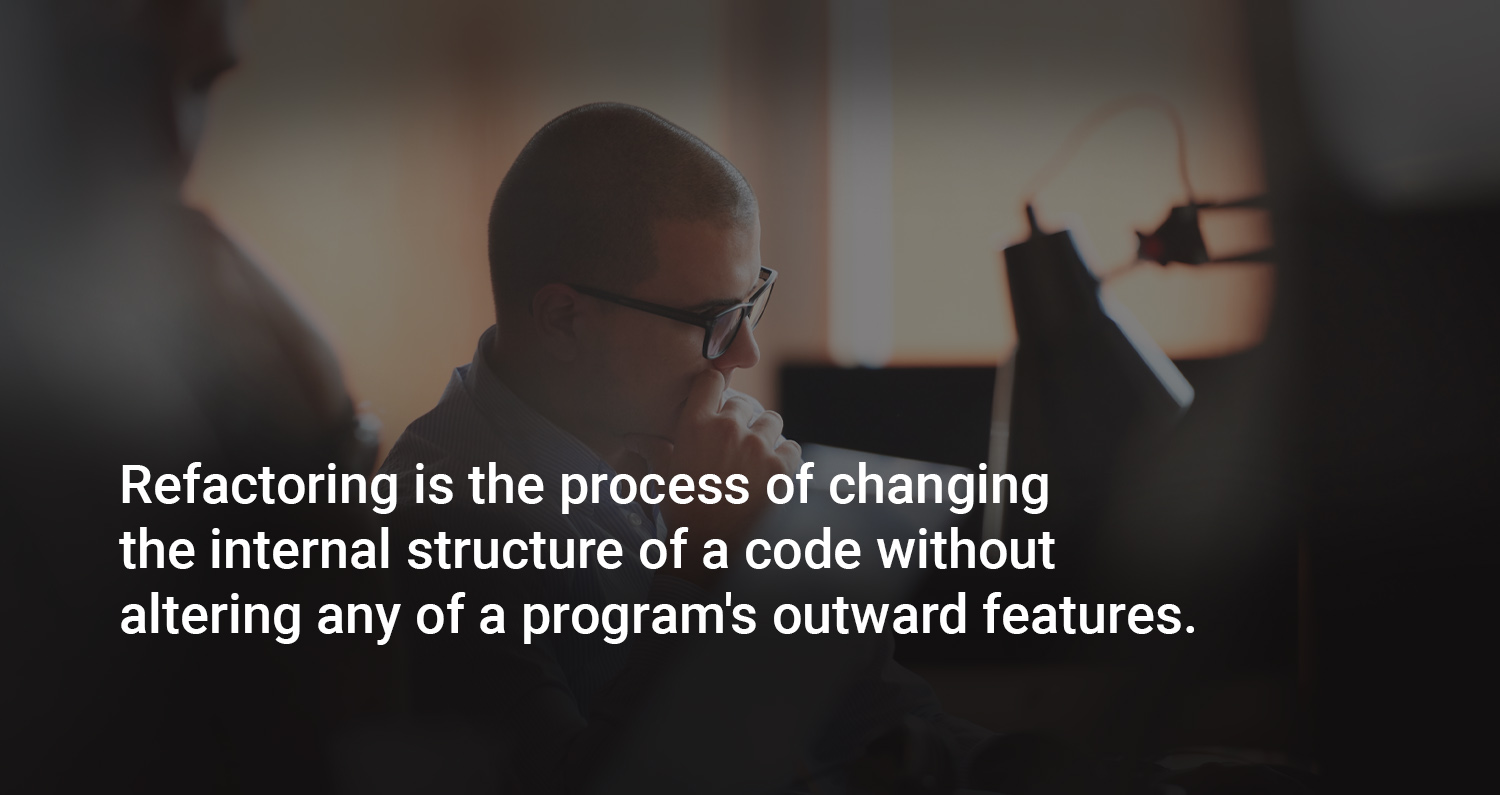 The point of code refactoring is about fixing a problem before it can occur. This proactive way of thinking allows for the elimination of code smell. Code smell is essentially any redundancy within a code that makes it longer and harder to manage, leading to less efficient programming.

Some project leaders may not fully comprehend the benefits of code refactoring as the program itself does not demonstrate any apparent changes as it runs. The point is about organizing a program behind the scenes to circumvent future bugs and breaks.

What are the benefits of software refactoring?

All software applications will require regular maintenance to optimize performance. Software refactoring is a form of legacy system modernization. Modernizing software enables a company to stay ahead of the game and keep a software program in peak condition. Applications with refactored code work faster, and improve customer usability.

When should a code be refactored?

Hopefully, we’ve convinced you of the gain of software refactoring. However, is there a time in a code’s lifecycle where it is more vital to practice refactoring?

Software becomes obsolete with time. This problem can become apparent when adding a new feature to a program written with a technique from years ago. In this case, a new feature isn’t going to work on a module written in an outdated coding language.

If this situation seems familiar, then your project is likely ready for software refactoring. In this case, choosing not to will likely lead to a messy development process that will take up comparably much more time and effort. The attempt to add a new feature to an unclean code is often more expensive and sometimes just impossible.

That’s not to say there aren’t any drawbacks to software refactoring. While this process is a great practice to maintain to keep things clean in-house, it is not guaranteed to solve all your code’s problems. Further, refactoring can be a time-consuming process.

As such, if your team needs to meet a specific deadline, we do not recommend refactoring at that moment. Sometimes it can be cheaper to rewrite a code entirely, especially if the original code is written on old/obsolete groundwork. Keep in mind that if you choose to rewrite a program entirely, then the features won’t stay the same as they would in the case of refactoring.

There are a few strategies besides refactoring you might consider, including but not limited to: redesign of the application, reimplementations, and rewrite of the code.

Contact Tizbi software experts today to figfure out the best solution for your needs.

The first step of the process is to decide whether refactoring is the right solution for your project. Here are some tells that it is time to refactor your software:

New features can’t be added because of outdated base code

Fixing one bug brings about a variety of new bugs

Your code is riddled in “code smell”

The above leads to an unmanageable code in which no new updates can be implemented, and a project as a whole will stall as a result.

Once you decide to move forward with refactoring, the next step of the venture is to create a plan. Analyze the intended system and identify which part of the code takes priority.

For a successful refactoring project, you need an experienced team of developers, support and understanding from management, time to accomplish this long-term project, and a flexible plan. Last but not least, refactoring requires constant testing and a thorough QA team.

What are common Refactoring Techniques?

There are several possible approaches for heading a software refactoring project. It is essential to pick a strategy that is compatible with the end goals of your company’s efforts. 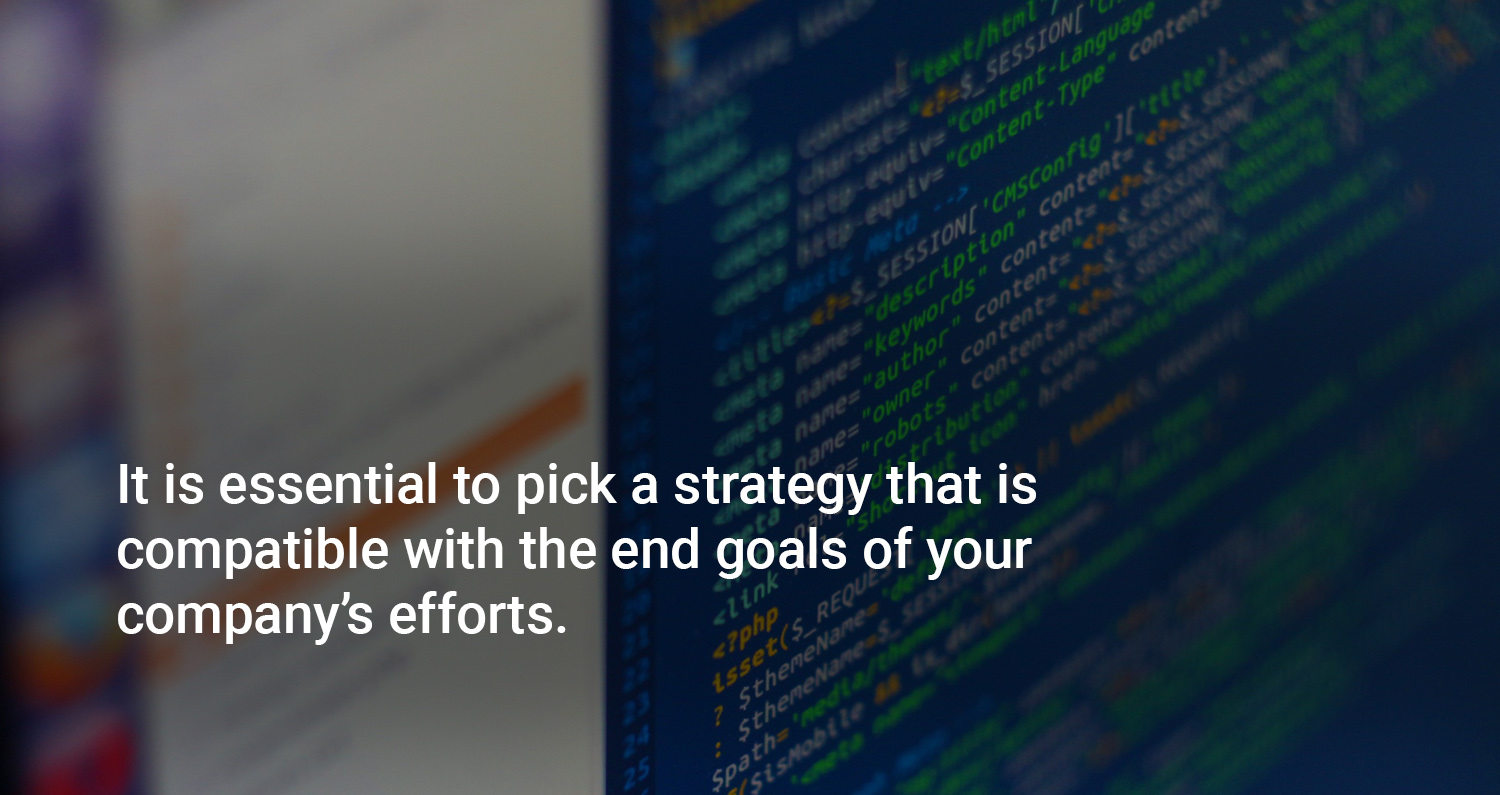 There are many strategies to choose from depending on the established goal of your refactoring project.

They are an electronic music licensing platform, enabling authors to upload tracks, license their music, and showcase it for movie producers, venues, and other potential buyers. Meanwhile, crumbs customers acquire a license to legally use the music tracks of various genres, moods, and styles for diverse commercial needs.

This project began about ten years before Tizbi inherited it. Initially, the developer in charge was not following the best practices when crafting the project. When the Tizbi development team inherited this project, our client had a very constrained budget and could not afford full refactoring.

Eventually, a full refactoring project was initiated, and the project manager was able to win the support of management, which is vital for such an endeavor. At the same time, the customer wanted to change the GUI (graphic design) of the whole project, adding another level of complexity. All was possible due to the flexible nature of software refactoring.

The refactoring project lasted about three months, and the QA cycle was ongoing for another 3-4 weeks. The redesigned website was more aesthetically and worked much faster. Finally, our IT team implemented important new features that were on hold for a long time due to the old or substandard code inherited from the previous development team.

ClearCreek Trucking, a logistics company, has been a Tizbi customer for approximately ten years. Our development team helped them create a mobile application that truck drivers used to track time, orders, and other information integrated into back-office databases.

The original version of the software application was created using the Apache Cordova framework. It was working nicely, yet the framework would not be supported in the future by the vendor. There was no choice but to change the underlying technology to another one.

After several consultations, a refactoring project was initiated. In this project, both time and cost were important considerations. The Tizbi development team was able to provide quick service and ensure tight budget control.

The refactored system was functioning within a month, and it was in full production mode in about six weeks. Although it was a stressful situation for the customer at first, we resolved it to their satisfaction with refactoring.

Software refactoring is a critical best practice to keep up when writing a software program. By committing to such a project, a program will get rid of redundancies, run smoother, and improve the overall quality of a piece of code, significantly lowering the risk of future expensive breaks.

Is your company ready to implement software refactoring? Contact us today for a consultation and get the ball rolling.

Make Your Business Vision a Reality

Tell us about
your business needs

We provide a FREE
no obligation estimate